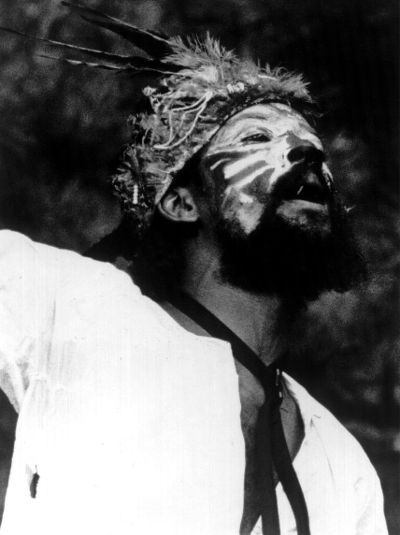 By a coincidence that seems extraordinary, at least to me, Joseph Jarman’s death on Wednesday, at the age of 81, took place two days after a group of London-based artists had performed his 1966 poem-with-music “Non-Cognitive Aspects of the City” to a packed audience at Cafe Oto. Dante Micheaux read Jarman’s words beautifully, sharing the stage with the singer Elaine Michener, Byron Wallen on trumpet, Jason Yarde on saxophones and electronics, Alex Hawkins on piano, Neil Charles on bass and Mark Sanders on drums. It was a surprising and welcome choice in an unbroken two-hour set that also included works by Jeanne Lee, Eric Dolphy, Archie Shepp and Jayne Cortez. (Here is Mike Hobart’s excellent FT review of the gig.)

Jarman, who died in a New Jersey home for actors, spent his last decades as a teacher of Shin Buddhism, having significantly reduced his involvement in musical performance from about 1993 onwards. He’ll be best remembered as a founding member of the Art Ensemble of Chicago, which evolved in the mid-’60s out of Roscoe Mitchell’s quartet and Muhal Richard Abrams’ Experimental Band, in both of which he played. This made him an early member of Chicago’s Association for the Advancement of Creative Musicians, now into its sixth decade.

Like many other great musicians — including Gene Ammons, Bo Diddley, Johnny Griffin, Dinah Washington, John Gilmore, Nat King Cole, Richard Davis, Eddie Harris, Freddie Below, Wilbur Ware and Johnny Hartman —  he had been taught at DuSable High, on Chicago’s South Side, by the legendary Captain Walter Dyett, the school’s music instructor from 1935 to 1962. His instrument at that time was the snare drum, which he played in the school band.

He began studying the saxophone and woodwinds while stationed in Germany with the US Army from 1955 to 1958. On returning to Chicago he met Mitchell and Malachi Favors, and his course was set. He became part of a music that absorbed, metabolised and reimagined everything from the country blues to John Cage, breaking down the conventions and creating new approaches. The impact of their arrival in Europe in 1969, together with Anthony Braxton, Wadada Leo Smith and others, has yet to be properly assessed.

I was fortunate enough to hear the Art Ensemble on several occasions in what I suppose we think of as their classic incarnation — notably in Central Park’s open-air Wollman Auditorium in 1973, their first New York concert, when they played the epic “People in Sorrow”, and at the Roundhouse in London later in that decade — and on both occasions I had my consciousness rearranged in a very fulfilling way. With their slogan “Great Black Music: Ancient to the Future”, they took ownership of what they were doing with a visionary confidence that continues to exert an influence on new generations.

In her book As Serious As Your Life, Val Wilmer describes Jarman as “poet, philosopher and polemicist as well as musician.” On his last studio recording with the Art Ensemble, Sirius Calling (Pi, 2004), he opened a saxophone-and-drums duet with Don Moye by speaking these words:

Every day is a perfect day

Every moment a perfect moment

Every second a perfect second

We can see complete darkness simply by closing our eyes

We can see complete light by truly opening our eyes

* The photograph of Joseph Jarman is from the cover of his first album, Song For (Delmark, 1967), and was taken by Joe Banks.