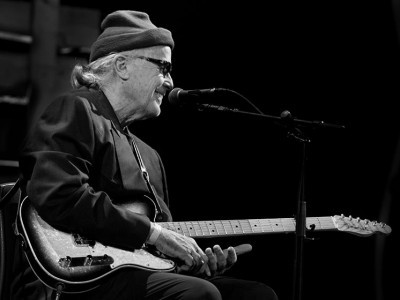 It was quite enough of a thrill to hear Ry Cooder, having temporarily banished his excellent band, singing Woody Guthrie’s “Vigilante Man”, long a staple of his repertoire, at Cadogan Hall last night. But a couple of minutes in, he took a left turn with some new words:

Trayvon Martin was only 17 years old when he took a little trip down to the grocery store / Well, he might have gone on to be President / But that’s something we’ll never know / Because he ran into a vigilante man…

In the handful of seconds that it took to sing those words, the temperature of the room changed. Channeling the menacing throb of one of John Lee Hooker’s talking blues, Cooder sang about the killing of Trayvon Martin and followed the thought into a rap about Brett Kavanaugh, Mitch McConnell and Donald Trump. And the audience went with him, all the way.

Once upon a time, Cooder could fill Hammersmith Odeon eight nights in a row. Enough of us are left to have filled Cadogan Hall at least as many times. This, however, was the only show, and I was lucky to get a ticket at the last moment. And how glad I was to be given the chance to hear him, in his 72nd year, singing and playing and organising musicians with as much zest and enthusiasm as you could wish for.

The band featured his son Joachim on drums, Mark Fain on bass guitar, Sam Gandell on alto and bass saxophones, and three singers known as the Hamiltones, from North Carolina: Toni Lelo, 2E and J. Vito. The material was a combination of old favourites — “How Can a Poor Man Stand Such Times and Live”, “Jesus on the Mainline”, “Go on Home, Girl”, “Down in the Boondocks”, “Little Sister” — and songs from his new gospel-based album, The Prodigal Son.

That emphasis thrust the singers into the spotlight, and they thrived in it. Their own featured spot included a song called “Highway 74” (with Lelo on Mayfield-style guitar)  that showed them to be in the tradition of groups like the Spinners and the Manhattans. The gospel power was turned to full beam for “99 and a Half” and a gorgeous treatment of Carter Stanley’s “Harbour of Love”, much richer and more resonant than the album version.

Cooder played some fine solos on a number of instruments, including an electric mandolin. He gave several spots to Gandell, who produced a house-wrecking bass sax solo on “The Very Thing That Made You Rich” as well as using a harmoniser and other effects on his alto — its bell muted with a cloth — to provide atmospheric backgrounds.

“See you next time or in heaven, whichever comes first,” Ry said at the end. For the final encore, concluding a two-hour show, he wisely shone the light back on to the singers, inviting them to deliver “I Can’t Win” with an intensity that left the hall drained. As long as there are still people who can sing like that, all is not lost.

* If anyone knows who took the very nice photograph above, which comes from the promotional material, I’ll add a credit.