A glimpse of Anne Briggs 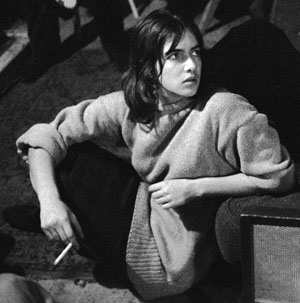 It was my good fortune to see and hear the great folk singer Anne Briggs in her youthful prime, before she turned away from public performance, leaving only a handful of recordings and an indelible influence on the likes of Sandy Denny, June Tabor and Kate Rusby. A fine half-hour programme about her on BBC Radio 4 last week, titled The Voices of Annie Briggs, written and presented by Alan Hall, brought that precious memory springing back to life.

She would have been not yet 20 when I saw her at the Nottingham Folk Workshop, close to the old Lace Market (at a time when it still contained a few surviving lace manufacturers). That was where she had encountered Ewan McColl and Peggy Seeger, who heard her sing one night in 1961 and took her off to join Centre 42, their travelling folk-arts festival. She was 17 then, so I must have heard her a year or two later on a return visit to her native city; by then she would have learnt “Blackwaterside” from A.L. Lloyd and hooked up with Bert Jansch, who became first her boyfriend and then her lifelong pal.

I don’t remember exactly what she sang that night in 1962 or ’63 — although I’m pretty sure her short set included “She Moved Through the Fair”  — but I do remember, very vividly, the impression she made: she looked like the girl you wanted to run away with, and she had a voice that you’d have followed anywhere.

But she resisted any attempt to turn her into a commodity, and her nature seems to have resisted stability on someone else’s terms. As she tells Hall in the radio programme: “You must remember that in the late ’50s, early ’60s, I think it was hoped that I might become a nurse, for instance, or a hairdresser, and that I’d marry and have children and become quietly domesticated. I’m a bit feral, perhaps.”

Hall interviewed her at her home in the west of Scotland, where she lives alongside nature and beside running water, which seem to provide all the music she needs. The last time she sang was when she put her infant grandson in a sling and took him for a walk by the river. “It seemed to soothe him,” she says.

* The photograph of Anne Briggs was taken by Brian Shuel in Hampstead, North London, in 1962.