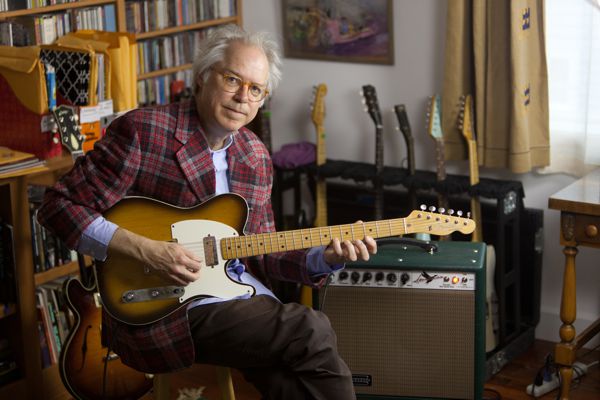 There was a time, seven or eight years ago, when I came to the conclusion that Bill Frisell was simply making too many records. I fell out of the habit of automatically buying his new releases because he seemed to be spreading himself too thin. Good Dog Happy Man (1999) and Blues Dream (2001) are still two of my all-time favourite albums, but I tend to prefer him nowadays as a contributor to other people’s records — something to which his particular expertise is well suited. Used sparingly, the characteristics of his playing add texture and flavour, just like King Curtis or Steve Cropper once did.

The job of being an accompanist is much underrated these days, so it’s good to welcome the arrival of two outstanding new albums on which Frisell fulfils that role: first with the saxophonist and flautist Charles Lloyd on I Long to See You and second with singer-songwriter Lucinda Williams on The Ghosts of Highway 20. They’re very different, of course, but they benefit equally from the guitarist’s modest, graceful touch.

When I interviewed him for the Guardian in 2002, Frisell explained a personal evolution that had begun with his first 45, the Beach Boys’s “Little Deuce Coupe”. Then came the Beatles and Manfred Mann — “that’s where I heard the blues for the first time” –followed by the Rolling Stones, John Mayall and the Paul Butterfield band. “I was coming to the blues backwards,” he said, “by figuring out where the English bands were getting a lot of their stuff from.” He may be in his sixties now, but he’s kept a sense of discovery in his music, whatever company he happens to be keeping.

I Long to See You finds Lloyd and Frisell tackling some familiar material, such as the saxophonist’s “Of Course Of Course” and “Sombrero Sam”, and a version of “Shenandoah” that doesn’t quite match the sublime reading Frisell and Ry Cooder contrived on Good Dog Happy Man. The biggest surprise is a resolute instrumental version of Dylan’s “Masters of War”, while the soulful Spanish traditional song “La Llorona”– previously recorded by Lloyd — invites Frisell to display his innate lyricism. Guest appearances by Willie Nelson on “Last Night I Had the Strangest Dream” and Norah Jones on “You Are So Beautiful” are pleasant but not exactly essential.

The track that justifies the album’s existence, however, is its closer, the 16-minute “Barche Lamsel”. Named after a Buddhist prayer, it allows Lloyd (its composer), Frisell and their three bandmates — the steel guitarist Greg Leisz, the bass guitarist Reuben Rogers and the drummer Eric Harland — to improvise a dreamy five-minute intro on a single chord before drifting into a pulse defined by the drums  for a delicately funky jam that would once have been described as “spaced out”.

The concerns of The Ghosts of Highway 20 are more earthly in tone but no less spiritual in nature, if much less comforting. Lucinda Williams’ ravaged voice and bar-room country-blues songs do not trade in reassurance. Her America is a place of wayfaring strangers fleeing the past and seeking refuge from the future. As the poet of this world of lost highways and dangerous glances, Williams is rivalled only by James McMurtry.

Like its predecessor, 2014’s Down Where the Spirit Meets the Bone (which also featured Leisz and Frisell), this one is a two-disc set. The extra length offered by the format would exhaust the capacity of most singer-songwriters, but it seems ideally suited Williams’ temperament. Although her songs are often skeletal, they need to stretch out and breathe inside arrangements that create their own sense of time. On “Louisiana Story” the two guitarists sit either side of the parched voice, carefully picking out a double commentary against a tempo that flows like a thin stream of black treacle.

* The photograph of Bill Frisell is by Monica Frisell.